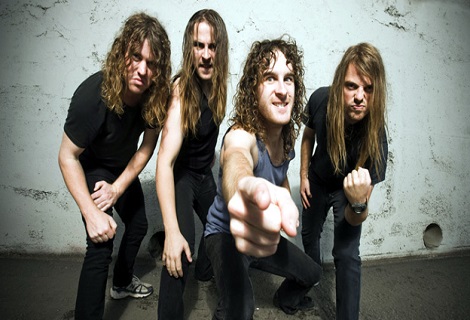 Do Airbourne provide a lesson in old school rock and roll or is it dying for a reason? Getintothis’ Joseph Viney bridges the gap between the past and present.

The first thing that greets you is a wall of speakers. And if that isn’t enough to get you rocking and rolling then you may as well call it quits.
Airbourne follow a rather grand Antipodean tradition of loose, dirty rock and roll. The forebears are AC/DC, and thankfully, much has yet to change.
Manchester’s Ritz is packed and sweaty. It’s one of the hottest venues that Getintothis has dealt with in years. When they talk about sweat dripping from the walls, well…here we are.
The thing about this kind of rock n’ roll is that is suffers from its ambiguity and its inherent lack of street cred. Times have changed, and where in the past we can accept chord changes that drift simply from A-G-D, we become accustomed to something else; something more ‘advanced’.
But to simply dismiss Airbourne as relics is doing them a disservice. What they offer is a style sorely lacking from our new common lexicon.
Indeed, from the first crunch of Ready To Rock, we know that, as Neil Young posited, “rock and roll will never die“. They know it too.
What we’re treated to is a lesson in head-banging, riff-making, solo-shredding fancy.
They can play the crowd and tease them too. As Aussies they’re obliged to take us down on the cricket and they do so with aplomb; reminding us of the recent English debacle at the wicket.
But what they lack in international friend-making they do so in volume. By time we get to the fist-pumper Back In The Game, the crowd are bowled over, deaf and still desperate for more.
Watching each band member smash a can of ale into their face before letting the shards off into the crowd is a reminder of the dangerous power of what they do.
Yeah ok, it might seem like a rather corny time-drag to the days of Motley Crue and their Neanderthal ilk, but Airbourne are in the realm wherein they’re in on the joke and they’ll take it to the punchline and beyond.
It’s all very post-modern, is it not?
Moreover, why should we complain? In the days of po-faced groups that seek to cross genres for its own sake, we should be grateful that groups like Airbourne bring us down to earth; which, like themselves, is an irony in its own special way.

Further reading on Getintothis
Real Estate head for Liverpool this Autumn.
SOHN readies UK tour including Kazimier date in September.
Getintothis on new electronic Mersey duo Adronite‘s debut EP.
By The Sea return with I See A Crystal Sky ahead of summer second album release.
Liverpool bands line up for Brazil World Cup 2014.
Forest Swords: From Norse sacrifices to Smooth FM and making the follow up to Engravings.
Twilight Sad to play cult debut album in full in Liverpool.