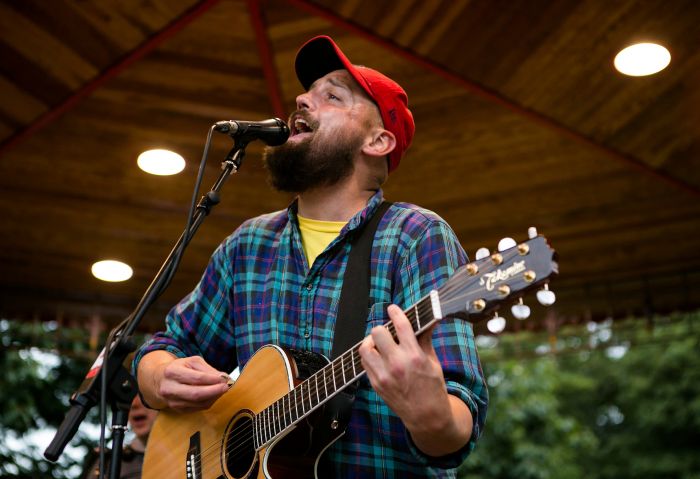 Liverpool’s Silent Sleep release second album Stay The Night, Stay The Morning Too today, ahead of their trip to the Sundance Film Festival, Getintothis’ Paul Higham catches up with Chris McIntosh – plus listen to two exclusive tracks.

As Liverpool’s Silent Sleep return with a brand new album, Stay The Night, Stay The Morning Too which is due out on Monday 19 January, Getintothis were fortunate enough to be granted an advance listen and an exclusive chat with Chris McIntosh.

It is often said that following up a debut album is one of music’s most difficult challenges. While one has seemingly all the time in the world to finely hone the songs of a debut, for many the follow-up can appear rushed as the band tries to build on the momentum and elevated expectations raised by a promising first offering.

If a second album provides a challenge, it is one that Silent Sleep have passed with flying colours. The record builds on the sound of the debut and carries it with an assured confidence. Retaining the melancholic beauty of Walk Me To The Sea, the songs seem more fully formed and the arrangements lusher and more textured.

The album is big-sounding for sure, but it also reveals a subtlety enabling its emotional tenderness and heartfelt warmth to remain at the fore. It is a far from easy thing to pull off, but the band have managed it. You can tell that it has been a labour of love and the care and thoughtfulness that have clearly underpinned the recording process are almost audible.

The close to orchestral arrangements provide the perfect backdrop to Chris McIntosh‘s intensely personal and honest lyrics. Too often performers hide behind a persona, afraid or reluctant to reveal their true identity. Not so with Silent Sleep.

How Can It Be Like This tells the story of the singer’s relationship with his dad who walked out on his family when he was a small child. A reunion was swiftly followed by a further rejection in adulthood. This sense of abandonment provides lyrical inspiration to McIntosh as the undoubted anger translates into a beautiful defiance.

On The Steps Of The Bombed Out Church is a bittersweet love song whose otherwise schmaltzy sentimentalism gives way to an overbearing sense of euphoria and works as a celebration of home, place and identity as much as it does as a traditional love song. Its almost gospel-influenced rousing chorus at the end can’t help but put a smile on your face.

The record is characterised by its many collaborators and this is most evident on Love Never Lasts, the closing song on the album and a hauntingly fragile duet with Adele Emmas of Bird. The song appears on one hand to be downbeat and sombre but, in suggesting love to be fragmentary and transient, its overriding message appears to suggest that we should live life in the moment and enjoy what we have when we have it. That is a message that we can endorse.

Silent Sleep are about to head off to Salt Lake City to promote the album at Sundance Film Festival. Before they board their flights, we caught up with Chris to have a quick chat about the album, its influences and who he is currently most impressed on the Liverpool music scene.

Getintothis: Is it difficult to follow-up a well received debut and what were the challenges you found in producing a second album? Did it bring with it additional pressures?

Silent Sleep: I’ve written songs pretty much non-stop since I was about 17 – I’m 33 now – so for me Walk Me To The Sea didn’t really feel like a first album, so in that sense the traditional pressures of writing a second didn’t really occur to me, although technically it is!

Also, the first album was only released on 250 copies of vinyl so I’ve actually included three songs from that album on this new one too, because this one will get much wider exposure and fingers crossed a lot more people will get to hear it.

I’m always writing, not just for Silent Sleep but for number of other projects, too – I like to keep busy. I go a bit mad if I’m not constantly doing stuff.

Getintothis: The new record has seen you collaborating with many rising stars of the UK music scene. What affect did that have on the production of the album and what do you think the impact was on the overall sound of the album?

Silent Sleep: I recorded the album at Whitewood Studios in the Elevator building with my long-term producer, Robert Whiteley.

He’s done lots of stuff with Clinic and The Wombats amongst others. Tord from The Wombats popped into the studio one day to borrow a mic and I was looking to get some cello parts down and Tord played cello, so I asked him and he was super-keen to get involved. It was supposed to be on one song but he ended up playing on nearly the whole album! He turned out to be pretty integral when it came to arranging the string parts.

We had Dan Croll singing backing vocals on quite a few tracks, too – he has a studio a few doors down from Rob’s, so we roped him in – he was great, too – spent quite a lot of time in there with us! The biggest revelation for me, though, was the girls from Bird who came in to sing some backing vocals on one or two tracks and ended up singing just as much as me on the record.

The final song on the album, Love Never Lasts, is a duet with Adele Emmas and it’s turned out to be my favourite track on there. There are loads of guests playing on the record – a lot of people who are way more talented than I will ever be!

Getintothis: While the record has a lot of musical collaborators, lyrically the record feels very personal and very intense. Can you shed a bit of light on the themes of the record and the inspirations behind it?

Silent Sleep: I guess when I started Silent Sleep, I wanted to make sure it was always honest to me. I can write about anything, for anyone, but for the songs I write for this project I want to keep personal and write about actual things that have happened to me. When I’m an old codger and looking back at my life, I could quite happily die lonely and penniless so long as I leave behind some impression of my life in these records I’m making with Silent Sleep.

There are a few things that I touch on that I also touched on in the first record. My dad jibbed off when I was 1 and then I find him when I was 28 and he jibbed me off again, so that kind of reignited that anger that was there.

There’s a few songs about that kind of thing. It’s kind of cathartic. I felt embarrassed about singing about things so personal at the start, but I feel comfortable with myself now, at 33, to know that I’m not completely mad and I’m certainly not a moany person in real life.

Getintothis: You are shortly about to head to the Sundance Film Festival to premier the new record. How did that connection arise and how do you feel about returning there after having been so warmly received last year?

Silent Sleep: Last year I began working with a company called Really Epic Dog, who are based out in Salt Lake City, which is where the Sundance is held. They have pretty strong ties with the people there and with the album coming out at the same time it’s on, they arranged for us to go over and play a load of gigs out there to celebrate!

It was a strange and brilliant experience last year – we played in some beautiful places. It was interesting playing at a film festival as opposed to something SXSW, where there are just thousands (hundreds??) of bands playing everyday. We stuck out and a lot of people came to see us as a result. I guess it was nice for people to give there ears a treat after watching 4 or 5 films everyday.

This year we’ve got about 3 gigs everyday that we’re there so it’s going to be quite intense but we’re going to make a little film out there and write and record 4 songs to release when we come back so hopefully it’ll be like a little documentary to give people a little idea of what it was like.

Getintothis: A track on the new album makes reference to iconic Liverpool landmark The Bombed Out Church. What influence does home and the city of Liverpool have on the music that you make?

Silent Sleep: I wrote that song while I was living in Berlin and I was feeling pretty homesick. I’d started a relationship with somebody in Liverpool, so it was frustrating not being able to spend time with that person as much as you’d want to – especially at the start of a relationship, when all you want to do is spend every waking and sleeping second with them.

“I Kissed you in the boat” doesn’t really make sense as a sentence unless you get the reference, which is to Le Bateau, the club I DJ’d at with Jules Bennet for many years, and the place I first shared a kiss with this person.

Obviously it’s a dead sentimental, slushy song, but it’s also got quite a euphoric, almost victorious feel to it. I had no idea it would resonate with as many people as it has!

I think Liverpool has an influence on me personally due to the quality of the all the other bands that are doing stuff here. A lot of it is amazing and it’s a nice to have that to keep you on your toes. I don’t know where Catfish and The Bottlemen are from, but i’m guessing there are not that many good bands there.

Getintothis: The wider Liverpool music scene feels incredibly buoyant at the moment, where do you feel you fit in within the scene and which bands have been catching your eye recently?

Silent Sleep: I don’t even know where to begin, there are so many great bands and so many different pockets doing completely different things. I’m a big fan of Bill Ryder-Jones‘ stuff, I’m super excited about Outfit‘s new record because I’ve followed those guys for years now and I’ve seen how pro-active they are and how hard they work.

I’m sure All We Are are going to release a really big album, and they’re of the same ilk, hard-working and prolific. Stealing Sheep have obviously been flying the flag for a couple of years now and I’m excited by the prospect of their new record.

I stayed up one night after a load of wine and listened to Lapsley‘s song Station for about 2 hours, once. I love that. There are so many! I love the Harvest Sun bands and the Mellowtone guys always have good shows on, too.

Stay The Night, Stay The Morning Too is released on Monday 19 January and is available to buy here.