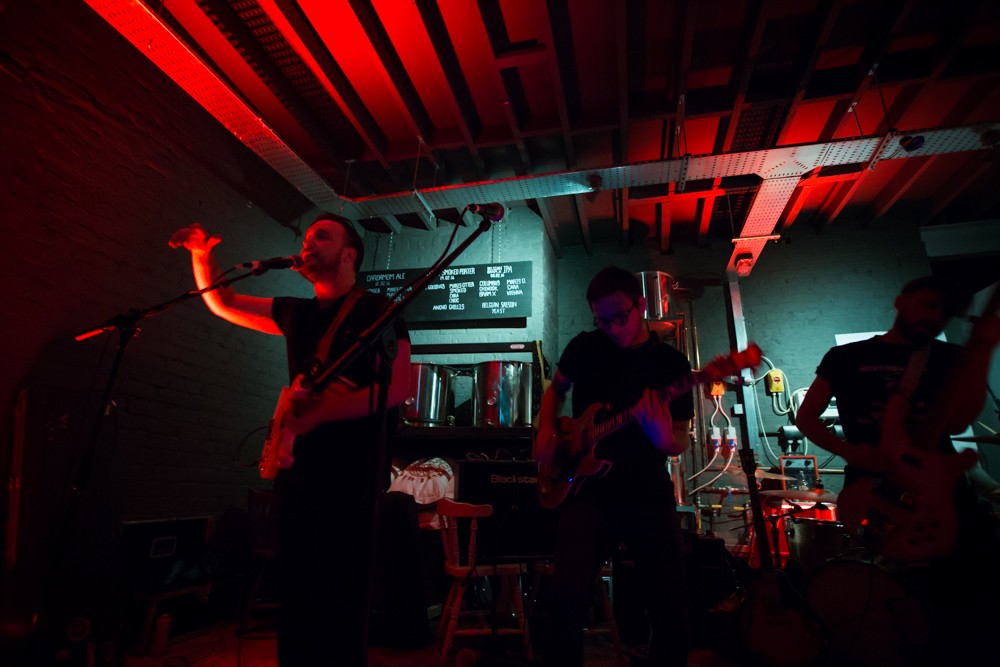 A gig in a brewery? A gig with a difference! Getintothis’ Rick Leach was at Liverpool’s Black Lodge for the launch party of Lying Bastards new single.

Well, this would be different. A gig in a brewery. A proper brewery at that. We didn’t really know what to expect as we headed into the new venue, Black Lodge Brewery on Liverpool’s Kitchen Street for the launch party of Lying Bastards new single, Head to Tokyo. Would there be an overwhelming aroma of yeast and hops? Would we be stepping over bunches of industrial equipment, chains, pipes and that sort of stuff? (You can probably tell that we have no idea at all how beer is made.) Would we all have to wear hi-viz jackets and hard hats once we entered? We could all end up looking like awkward Government ministers visiting a factory.

Luckily there was none of that nonsense. Black Lodge is a great little venue, full of craft beers, and normally serving a wide range of meats and cheese to put a lining on your stomach. The only sign of it being a brewery were a few chromed tanks (which we supposed contained some sort of beer) at the back of the stage, pipes and valves screwed to the wall rather than being strewn all over the place and a couple of sacks of hops. Or it may have been yeast. Something like that. There were no strange aromas and thankfully hard hats were off the menu.

It was time for some music.

With a strong line-up on the menu, everything was rattled through at some pace. There’s always a bit of risk when there are more than a couple of acts on a bill that most of the time is spent watching things being set up, microphones, guitars, drums being messed with. However this evening, it all ran like clockwork. Like a military operation, as soon as one act was done, another one jumped up and with a minimum of fuss, the show went on. All credit to whoever was organising it all.

And just like a mini-festival, there was a wide range of acts ahead of us.

First up was Dave McCabe. Armed with an acoustic guitar and a backup band, his woozy and fuzzy 1970’s Laurel Canyon singer-songwriter vibes went down well in the rapidly filling venue. It’s warm and comforting music, like a mug of hot chocolate for the ears and what may described as a pleasant way to start an evening’s worth of music off. Something to ease you into it all. There is a bit of an edge to his voice at times, however, a touch of crackle in a Neil Young way, a hint of Tonight’s the Night sadness over the acoustic guitar noodlings. A bit more depth than might be initially thought. He played five songs, rocked it out a bit with the last one and headed off to a round of well-deserved applause.

Just fifteen short minutes later there came a change of pace with the arrival of The Floormen. A three piece band: guitar, bass and drums. And a floor pedal that got some serious hammering. So much so that it should have been credited with at least full band membership, if not songwriting credits. In respect of The Floormens’s set then it surely should have been given some recognition in that regard because they only played one song. When does a song become a set? It’s hard to say, but when that one song lasts twenty minutes or so, we supposed that it was a bit of a moot point.

The Floormen were very well-received by the crowd and their Spacemen 3/Spiritualized noodlings, if a slightly obvious and derivative for us, showed some distinct promise and, at least, a willingness to do something different. It might all come across as a bit of a mess, but sometimes great art can come out of a “bit of a mess”.  It’ll be very interesting to see what direction these lads go in. Maybe they should drop all the “open your head, open your mind, relax your mind and float downstream” type mumbled vocals and just stick to instrumentals. They were certainly a change of pace from Dave McCabe and provide further evidence, if any is needed, of the current wide variety of live music out there at the moment.

And if we were looking for with a different tone then we certainly got it next with Psycho Comedy. By God, this lot are good! This was the second time we’d caught up with them in the last month and this time, they were even better than before. They opened with an early Fall-like racket, which is something that can only be termed as a very good thing indeed. A five piece with snarly vocals, a spiky attitude, brimming with a confidence that belies their tender years, three twisting and fractured guitars argued amongst themselves throughout their seven song set, all underpinned by a bass and drum combination that was as a tight as, well, a drum.

The introduction of a smoke machine towards the end of their set filled the small space with clouds of dense fog, so dense that it was impossible to see them playing, even from a few feet away, simply added an extra dimension to the whole thing. Psycho Comedy bravely battled on without batting an eyelash and with a squall of noise concluding their song, The One, we knew that this bunch are ones to watch out for. Catch them while you can.

The quick turnaround between acts kept everyone on their toes and there was a rush towards the bar before the next band entered the fray. Maybe it was because the beer was so good and that it was freely flowing but everyone seemed to be having a very good time at this point. It was packed, with barely room for a small elbow, but the overall vibe was very relaxed and happy. There was a palpable air of anticipation for Lying Bastards but before they had their turn, we were treated to the aforesaid Red Rum Club.

It seemed to be turning into a bit of competition. Psycho Clowns had upped the ante a notch. Red Rum Club stepped up to the mark. All dressed head to toe in black, this six-piece group certainly cut the mustard. Duane Eddy once recorded an album called Have Twangy Guitar, Will Travel and even if Red Rum Club were totally unaware of it then it’s always a fine step to start a set with a bit of twang. It also helps to have a trumpet giving it some welly, Mariachi-style as well. Top this off with a drummer who was determined to hit his kit as hard as possible and a front man who has confidence in buckets, then you can’t go wrong. They were superb.

They were like the lost sons of Hank Marvin & the Shadows, yet harder.

There have been many confident front men in popular music, but Red Rum Club’s Fran Doran makes someone such as Ian McCulloch appear like a shrinking and shy violet. Having said that, never once did it tip into boorish arrogance; it was just sheer confidence and exhilaration and that quickly transmitted itself to the audience. It was a joy to be part of it all.

The addition of the trumpet to Doran’s soaring baritone vocals gives the band a distinctive sound and quite similar to the pop sound of the Teardrop Explodes or Wah! back in the 1980’s. Without any explicit references, there is no mistaking which city they come from. A definitive (new) Liverpool sound. Another band to be watched and treasured.

We all had to catch our breath after that stunning performance, but there were only a few minutes before the night’s headline act and the main reason most of us were there topped the evening off. Lying Bastards. What a name for a band and what a band!

If you’ve never heard them, then you might be forgiven for thinking that they were some retro-grindcore outfit, Napalm Death type band, all growling and grrring incomprehensively over speed trashed guitars, or a heavy metally thing.

Lying Bastards are, thankfully, neither of those things. They are pure, unadulterated rock. Rock music in the best possible sense, and not in a Kerrang way. We thought we had seen some energy expended with both Psycho Comedy and Red Rum Club but from the very get-go, Lying Bastards ripped things up. They never let up for a second. Everything on stage was a blur of frenetic activity and this was mirrored in the audience, which by now had filled the small space even more than before. People were singing, or rather shouting along, and everyone, including us, seemed to have a big grin on their face.

Where Red Rum Club are, for now, clearly a Liverpool band, Lying Bastards mix of surprisingly melodic pop tunes fused with a rock sensibility, marks them out as a band that could easily cross many borders. A Shengen group, if you will. It’s highly possible that their forthcoming dates in Japan this April will see them being as well received on the outskirts of Tokyo as they were in a tiny brewery in Liverpool in February.

What a way to launch a new single! We just wish they were releasing one every week and if that is the response that got for a single release, we can only imagine how well they do with a full album to promote. Try to see them before they end up headlining some massive festival and taking the world by storm.

All in all, it was a very successful night. As we headed off, ears ringing and a spring in our step, we knew we’d been treated to something really rather good. Five excellent acts in a great new venue. A night to remember for a long time. 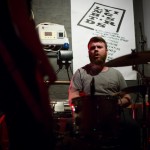 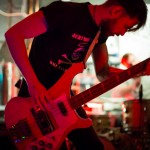 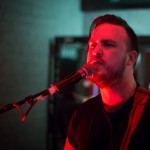 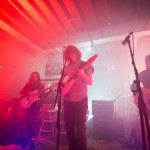 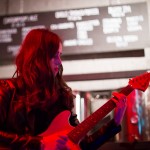 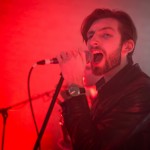 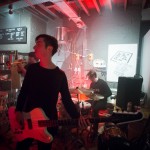 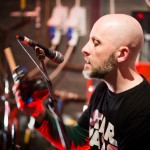 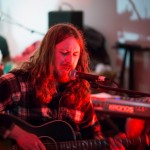