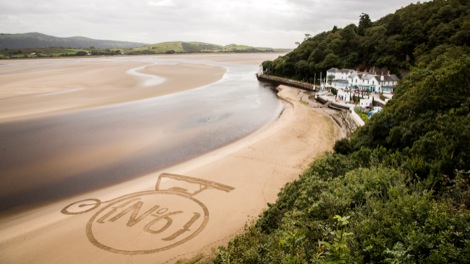 Festival Number 6 returns in September boasting a line up with My Bloody Valentine, Chic featuring Nile Rodgers and the Manic Street Preachers all set within the iconic fantasy village of Portmeirion. Getintothis’ Peter Guy cherry-picks the acts bubbling under not to miss plus a guide to one of the UK’s best boutique festivals.

Festival Number 6, much like its setting, is no ordinary music event.
A conceptual happening slotted into the eccentric Welsh surrounds of Portmeirion, home to cult TV series The Prisoner, Festival Number 6 features stellar live music alongside a raft of DJs plus theatre, guest speakers, film, installations and comedy.
Unfolding on September 13-15, music heavy-weights My Bloody Valentine, Chic featuring Nile Rodgers and the Manic Street Preachers headline a bill which reinforces the plaudits Festival Number 6 garnered during it’s debut offering in 2012.
Among the other big hitters are The Smiths guitar legend Johnny Marr, electronica singer-songwriter James Blake, avant pop-rockers Everything Everything, Super Furry Animals‘ Gruff Rhys‘s and producer Boom Bip‘s collaborative project Neon Neon, Mercury-nominated soul singer Lianne La Havas and maverick trip-hopper Tricky.
Elsewhere, I am Kloot, Mount Kimbie, AlunaGeorge and Laura Mvula join a live bill completed by Daughter, Wire, London Grammar, Leisure Society, Melt Yourself Down, Mary Epworth, Sivu, Badly Drawn Boy and Sam Airey.
Among the DJs playing are NYC legend Frankie Knuckles, Detroit techno guru Carl Craig, Massive Attack‘s Daddy G, Two Lone Swordsmen and Primal Scream collaborator Andrew Weatherall, club staple Gilles Peterson and a Getintothis favourite David Holmes.
The acts perform across the entire site, from the historic town hall to the Colonnade gardens, to the picturesque Estuary Stage and the promenade along the river, against a back drop of neo-classical architecture, sandy beaches and palm trees.
Elsewhere, punk poet John Cooper Clarke, novelist Caitlin Moran, and Booker Prize winner DBC Pierre head up the arts and culture line-up while Made of Stone (Getintothis review) and Snoop Lion Reincarnated are on the film billing.
Other cultural highlights include talks and readings from Tracey Thorn (Everything but the Girl), John Niven (Kill Your Friends), Bob Stanley (Saint Etienne) while Duncan Oakley, Mick Ferry and Steve Royle head up the comedy acts, all equating to something very special.
Six of the best – Getintothis’ picks from Festival Number 6
1. The Chimes of Big Ben:
An all-day session of psychedelic wonders on the Stone Boat, created especially for No.6 by Liverpool’s psych DJ warlord Bernie Connor and Will Sergeant.
Bernie is joined by Richard Hector-Jones, Andrew Weatherall, Justin Robertson, Will Sergeant and Jagz Kooner. The nine-hour Saturday session is named after an episode of The Prisoner and will feature wig outs, blow outs and freak outs, set against the beautiful backdrop of the River Dwyryd.
2. MONEY
Jamie Lee‘s hymnal beautific rock and rollers are made to play Festival Number 6. With their otherworldly cinematic fusion of dreamy shoegaze and lyrical profundity expect a minor tremor in the landscape when their set goes off.
Bella Union’s new boys played one of the sets of 2013 at Leaf Tea Shop earlier this year, expect something similar in Portmeirion.
3. Hookworms
The psych-rock connection continues with Leeds cosmonauts. Pearl Mystic is vying for debut, if not album, of 2013 – and their live sets are something to behold. We’ve caught them around a dozen times over the last 12 months – including a barnstorming set at Blade Factory back in April – and they bedazzle each and every time. Ones not to miss.
4. Islet
Expect something special from these lunatics. In fact, don’t expect anything, as they’re one of the most unpredictably vital live acts these isles have produced in sometime. Last time out in the Kazimier they threw their instruments around the place, smashing up drum kits, tambourines and all manner of percussive devices while remaining bang on the money. On home turf their set will go off.
5. The Liverpool Connection
There’s a whole host of Liverpool acts peppering Festival Number 6’s line up too – with four former GIT Award nominees taking to the stage. Fresh from playing Liverpool’s stunning Anglican Cathedral for Sound City, Wave Machines are joined by man of the moment Dan Croll, who’s sure to play a few new tunes from his forthcoming, highly-anticipated debut album.
Then there’s Merseyside alt-rock veterans, Clinic, another band who’s fantastical sonic wonderland will be perfectly at home in the Welsh wilderness while 2012 GIT Award nominees Outfit complete a Liverpool connection rife with magic.
6. These New Puritans
One of Getintothis‘ favourite UK acts, TNP meld ferocious ambition with a creative drive few can match. Hidden was #6 in our top 100 albums of 2010 while new album Field of Reeds only serves to emphasis their restless pursuit to push music forward.
The last time we caught them at Liverpool’s O2 Academy they were beautiful, yet brutal. We can’t wait to catch them once again – it’s been far too long.
For more info visit here. Or for ticket information visit here.