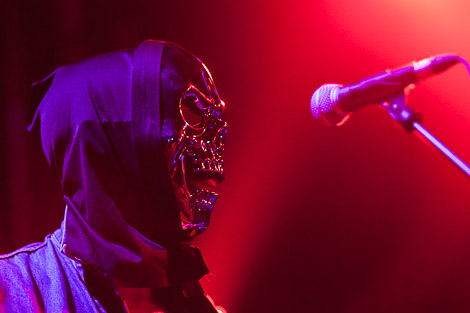 Pinkunoizu and Loved Ones demonstrate the art of rhythmic expression before Getintothis’ Peter Guy has his head wrecked by a percussive MoR juggernaut.

Rhythm may well be a dancer, but it can also be a pain the arse.
There are few things more annoying than being contrived into having a good time. And when you’re force-fed walloping dollops of faux-hippie happy-clappy camp-fire singalongs digestible only by crochet-knit-sporting Radio 2 listeners you’re only serving to put us in a bad mood.
Tunng were once the right side of mushroom-devouring folk space cadets, specialising in aural blankets of sonic comfort food seemingly custom made for Sunday evenings like this, yet somewhere along the way they’ve gorged on one too many snack pots of MoR resulting in a lumpy, sluggishness topped off with knuckle-bitingy forced posturing. 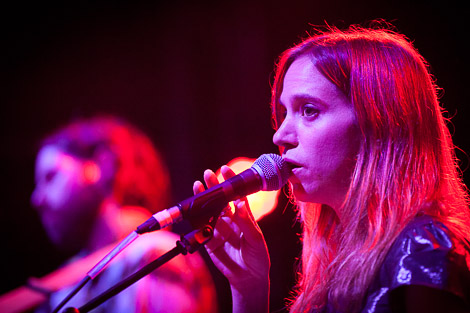 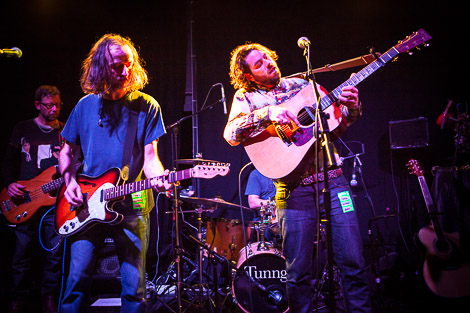 Tuung at East Village Arts Club, Liverpool
Their latest album Turbines, played almost in it’s entirety in Liverpool, does contain the odd gem – The Village with it’s upward stroked strums and four-part harmonies (Ashley Bates has a delectable, enveloping vocal) the finest offering tonight – yet too often they’re a one-trick, three-legged donkey hobbling along to intros formed from indiscernible radio montages, guitar meanderings and squelchy keyboard motifs.
Most remarkable of all is their broom cupboard of percussive instruments – you could have sunk the Titanic with the weight of shakers, bangers, clangers and trinkets they’re wheeling out. Sadly, they’re about as funky as a shed.
The funk, however, was out in force earlier in the evening, as great Danes Pinkunoizu served up something truly special. Cherry-picking elements from all corners of the out-rock spectrum their relentless dissonance fused post-punk industrial percussion, searing kraut grooves, ambient Amon Düül curtains of noise all interspersed with ferocious vocal yelps from their unappointed leader from being the drum kit.
Instant hit, Moped, from latest album The Drop, released earlier this year on Full Time Hobby, comes on supercharged; all backward loops, frenetic beats and textured undulations while the nine-minutes of Necromancer proves an evening high as modulated synth trade with a steady build of layered guitar before a searing, white-hot riff kicks in out of nowhere.
Oh, did we mention they were all wearing solid gold skeleton masks? Thrilling in every sense. 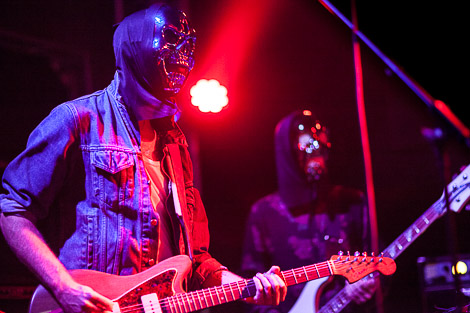 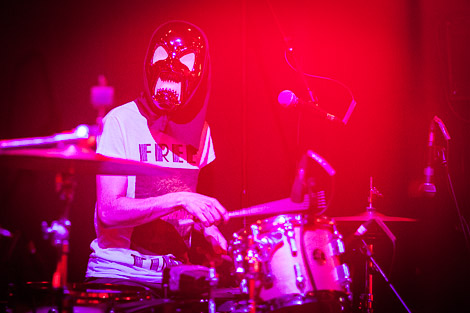 Pinkunoizu at East Village Arts Club, Liverpool
The evening began with the familiar, yet all the more welcoming, delicate rhythmic rumble of Loved Ones. We feel we’re running dry of adjectives to apply to the the beautiful All Your Cry and mellifluous magnificence that is Paper Crown yet it’s pleasing to see a small gathering of new listeners inside East Village gently rocking in unison to these glacial gems.
The inclusion of Currents, perhaps the least memorable outing from debut album The Merry Monarch seems a deliberate, almost-wilfully odd choice in such a short set, what with its barely there melodies, skittering woody drum clicks and ghostly breathy choral refrain and is completely overshadowed by the swelling majesty of Wild Palms – a track which utilises the band’s strengths to the fullest – understated hooks, birthday boy Ben Shooter‘s piano fills and a driving rhythmic unit.
Throw in set staple, Buck 65‘s Stella, a track which illustrates their knack for melding deft beats with their characteristic pastoral Englishness, and there’s ample evidence of just why Loved Ones, while going about their business quietly, are seriously ones to shout about. 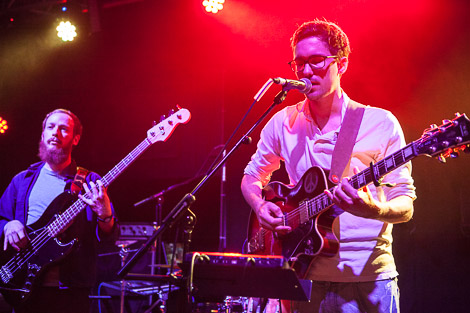