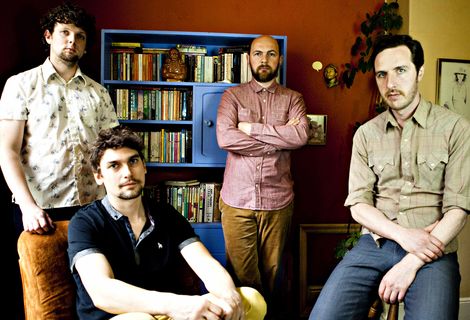 Wave Machines caused pop ripples with their debut album both sides of the pond before disappearing for several years. They returned this year with new album Pollen, and a distinctly nuanced darker sound. They talk to Getintothis’ Orla Foster about how Truman Capote influenced their moody, melancholic material.

Wave Machines are already a familiar name in Liverpool.
Four years ago, the quartet were setting the city alight with their ebullient electro-pop and soul-smattered vocal stylings. And then they we didn’t hear much from them for a while. So just what have the band been up to?
‘Well, we were on the road for a really long time,’ explains Tim Bruzon, the band’s singer. ‘For ages we were busy doing shows rather than recording, so it’s been nice to get back into the rhythm of making new material.‘
In January, after a three year hiatus, the band finally returned with a new album, much of which was recorded in St Bride’s church in the Georgian quarter of the city.
Did being locked away in the eaves of a church have an impact on the finished songs? Any sinister overtones we should look for?
‘The atmosphere of a place indirectly affects what you’re doing, for better or worse, Tim agrees.
‘If you record in a nice bright environment with lots of light and space, then you’re not going to come out with an album filled with gothic choral music. So maybe recording where we did has subtly influenced the way it turned out.‘
They may have left out the gothic choirs, but there’s no mistaking that plenty has changed in the Wave Machines camp since they first came to attention in 2008 with the irrepressibly catchy I Go I Go I Go.
This was followed a year later by debut album Wave If You’re Really There. Their sound at the time, with its echoes of Hot Chip and luxurious, Prince-style vocals fitted the zeitgeist perfectly – it seemed an output tailor-made for indie discos and hazy after-parties.

But while that record was often idiosyncratic – fevered dancefloors one moment, Nashville laments the next – new album Pollen sees the band truly cement their sound.
Having teamed up with producer Lexxx, whose credits include Wild Beasts and Björk, the result is a vastly layered work, at once haunting and deeply melodic. Under his guidance, Wave Machines became more ruthless with their editing and streamlined their material more tightly. It’s more complex, more rueful, more nuanced.
Take I Hold Loneliness, a slow-burning, funk-infused number – despite its sunny melody, there’s a paranoia clawing beneath its surface. Ill Fit evokes a similar discomfort, and Counting Birds overlays a dispirited monologue over trance-like crescendos.
‘Our sound has become more moody and melancholic in general,’ Tim agrees.
‘Although the singles we’ve released have got a bit more bounce, my feeling overall is that this record is darker.‘
Despite the strains of disco embedded in their sound, it’s true that Wave Machines take their cues from a real variety of sources, creating an atmosphere which is restive and occasionally bleak.
The title track on the new record, for example, is a tribute to the cockle-pickers who died in Morecambe Bay in 2004. Another, Blood Will Roll, was obliquely inspired by the media phone hacking scandal.
Recalling their previous record, the song Dead Houses painted the familiar rows of derelict streets scattered across Liverpool. Where do they look to for ideas?
‘Artistically?‘ Tim muses. ‘Well, I suppose family would be the best place to start. They’re a huge influence on what we do.
‘But I do also enjoy taking inspiration from films and other parts of popular culture. I really like Truman Capote, so maybe that has a subtle effect. And after I saw the film Moon, I felt straight away that I needed to write a song about it.
‘It’s hard to predict exactly where inspiration will come from. Right now we’re getting to that point again where we’re just working on translating our new songs to the stage.‘ 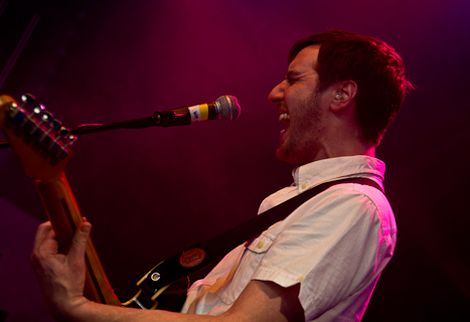 Culture aside, there’s a question we need to ask that few Liverpool bands will have the answer to: just how does one keep a falsetto in check?
‘I find the only way to get fitter, vocally, is to give your voice a lot of exercise. Don’t let it get rusty. Your voice gets looser and more elastic if you’re using it all the time,’ intones Tim (at regular pitch, we might add).
‘I did have a really bad cough once during at a show in Paris, which was awful. I didn’t think I was going to make it through, but somehow I did.‘
With the band already going from strength to strength, what will a GIT Award nomination add to their fortunes?
‘We’re really happy with the positive affirmation,’ Tim concludes.
‘Sometimes we can go for a while without really getting a lot of feedback, or any outside input.
‘So it’s great to know that we’re not the only ones who like what we do!‘
Modest and humble to the end, Wave Machines should know they’ve been a firm favourite of ours and many alike, for quite some time.