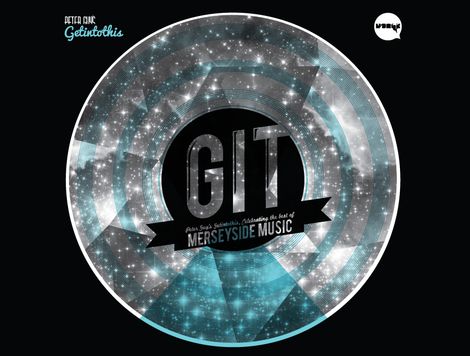 Baltic Fleet, The Justice Collective and many of the GIT Award 2013 nominees are captured in action at Leaf in a Getintothis video exclusive.

We’ve been holding this one back for a little while, but this video created by Getintothis’ Matt Owen is a little corker.
Owen, who works for GIT Award partners, Liverpool Football Club, and his team at Film Brat Productions captured the nominees performing at Leaf on Bold Street during the GIT Award 2013 showcase in April.
The soundtrack comes from a live rendition on the night of March Of The Saxons by GIT Award winner Baltic Fleet.
Featuring action from GIT Award 2013 nominees Conan, Nadine Carina, John Heckle and Tyler Mensah plus other artists that performed on the night including Bill Ryder-Jones, Sense of Sound and the Wild Eyes, it’s the perfect companion piece to a cracking evening of new Merseyside music.
The video also features special videos by Stealing Sheep, Barberos, By The Sea and Clinic while capturing the moving tributes given by those associated with the Justice Collective after winning the Inspiration Award.The Inspiration Award went to The Justice Collective who took a version of He Aint Heavy, He’s My Brother to UK Christmas Number One 2012 with all proceeds going towards Hillsborough Families legal costs in their fight for justice.
The Farm‘s Keith Mullin accepted the prize on behalf of the Collective giving a personal and hugely powerful speech recounting how he lost a friend in the Hillsborough tragedy before dedicating the Award to campaigner Anne Williams who died on Thursday.
He said: “I remember the frustration of not being listened to and ignored, victims, friends, mothers, fathers, brothers and sisters accused and viciously wronged. We knew what had to be said, but the words were buried, so we screamed, fought and never gave up, ‘we’re braver than you believe, stronger than we seem and smarter than you think’. Today I remember you, those who lost their lives needlessly, those left behind broken; I remember the pain, the hurt, and the injustice, and I remember all who have fought with integrity for so long, for justice, I will “never forget”, today I shed more tears, I remember you!”
The Farm‘s Peter Hooton who helped organise and appeared on the charity single and accepted the Inspiration Award on behalf of Justice Collective said: “I accepted this award on behalf the tremendous team behind the Justice Collective – they were truly inspirational and everyone involved from the music industry gave their time and effort free of charge. But really this is an award for the 24 year campaign for justice by the families and survivors.
“It was a truly remarkable achievement to get a Christmas No1 within such a short period of time and just shows what people power can bring about when they believe in a cause. I dedicate the award to John Glover and Anne Williams, true campaigners for truth and justice!”
Steve Rotheram MP, one of the chief organisers behind The Justice Collective said: “Music has the innate ability to express and even amplify in people a mixture of emotions. The Justice Collective captured the country’s feelings towards the Hillsborough disaster and the establishment-led cover up with a beautifully produced piece of music that rightly took its place at the top of the Christmas charts.
“The Justice Collective project was a story of solidarity. Everyone who took part did so for free and with the best interests of the victims, families and survivors of one of the greatest injustices of the 20th century at heart.
“In the year of the London Olympic Games, Diamond Jubilee and a US Presidential Election, it was Hillsborough and the fight for justice for the 96 that dominated the news. I am proud that we played a small part in keeping the topic of Hillsborough at the forefront of the news agenda and in doing so hopefully inspired millions of people through this piece of music to educate themselves on the real TRUTH of Hillsborough and its devastating aftermath.”
Liverpool Football Club, who were present filming the occasion, prepared a special video of the making of the single while Liverpool FC legend Kenny Dalglish made a special video honouring the members of the Justice Collective and hailing their Inspiration Award.
There were also special messages on the night from Liverpool FC great Jamie Carragher and Everton FC defender and keen music enthusiast Leighton Baines gave poignant messages of support for the Justice Collective in receiving their Inspiration Award.
The GIT Award 2013 shortlisted artists were:
Baltic Fleet
Barberos
By The Sea
Nadine Carina
Clinic
Conan
Dan Croll
John Heckle
Jetta
Tyler Mensah
Stealing Sheep
Wave Machines
We strongly advise you watch this over at Vimeo on the bigger screen. Enjoy!