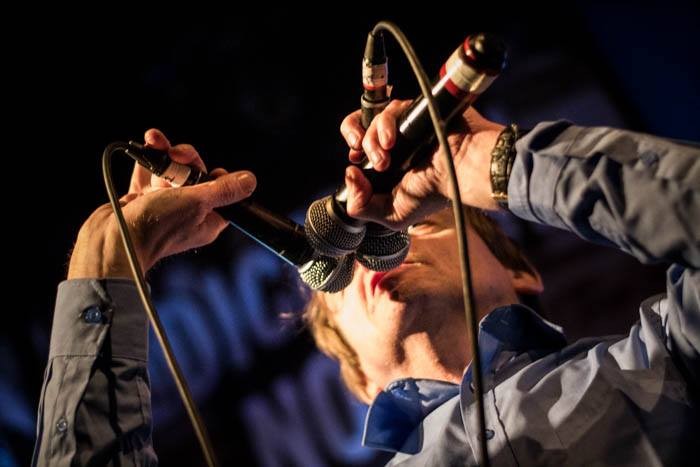 Mark E Smith of The Fall

As one of The Fall’s many great albums, Bend Sinister, turns thirty this September. Getintothis’ Will Neville muses on the band’s impact on the music scene, both then and now.

2016 has been a year of both tragic musical losses, and milestone anniversaries – fifty years since Pet Sounds and Revolver, forty since Ramones and The Modern Lovers and 25 since Nevermind and Loveless.

A less well-recognised anniversary is also upon us this year, as 29th September 2016 brings around thirty years since Mancunians The Fall released their ninth full-length studio album, Bend Sinister. Of course, every year seems to bring a big anniversary for a classic Fall album as they have released so many!

This one was the third of the five they recorded for Beggars Banquet, and completed a trilogy produced by John Leckie. Leckie was a veteran having worked with three solo Beatles, Public Image Ltd., Magazine, XTC and Syd Barrett amongst others. It was partly recorded in the delightful surrounds of Stockport and Bury, as well as the slightly posher Abbey Road Studios.

Pssst, The Fall have been annouced they’ll be headlining a mammoth all-dayer at Liverpool’s Arts Club. Find ou more here

Bend Sinister was named after the Vladimir Nabokov’s dystopian novel of 1947 and is the follow-up to the previous year’s acclaimed This Nation’s Saving Grace, arguably their finest ever album, though this writer would probably place it as a close #2 behind 1982’s classic Hex Enduction Hour.

The band by this point was already on its umpteenth line-up, although vocalist and leader Mark E. Smith was still being joined by American wife Brix on guitar, and long-time duo of Steve Hanley on bass and guitarist Craig Scanlon.

However, proceedings did not get off to the most auspicious of starts, with long-time drummer Karl Burns being fired just before the sessions began for once more failing to turn up for a gig. Former drummer Paul Hanley took on the sticks temporarily before the band’s driver Simon Wolstencroft (and mate of Karl’s) joined as a permanent member.

The revolving door aspect of the band’s line-up is highlighted with this album as Julia Adamson, who engineered some of the record, went on to join the group in the late 1990’s as a keyboard/guitar player, co-writing the likes of Masquerade and Touch Sensitive.

Leckie and Mark E. Smith clashed during the making of the album, with Smith complaining that “he’d always swamp everything, y’know, put the psychedelic sounds over it”. The final straw for Leckie was when MES insisted on mastering some of the tracks for the album from a bog standard audio tape that he had been listening to songs off the album from on his Walkman.

Suffice to say, Bend Sinister is somewhat less hi-fidelity than concurrent albums such as Graceland, So and Prince’s Parade.

The album actually climbed to the heady heights of number 36 in the UK, staying in the Top 75 for three weeks, making it their most successful long player on the charts to date. It also became the first Fall album to be released on CD.

It has a firm place in this Fall-lover’s heart as it was the first contemporaneous album of theirs that this writer bought, as a callow sixth former in Essex, devouring all kinds of music with our best mate, with the patronage of John Peel – a huge mark in The Fall’s favour.

This first Fall record this writer ever purchased was The Peel Sessions 12” that came out in June 1987, that includes one of our three very favourite Fall numbers No Xmas For John Key, far superior to the version on debut album Live At The Witch Trials to these ears.

We had to wait until February 1988 when The Frenz Experiment was released to actually buy a new album that was fresh to the racks, but we did buy Bend Sinister on cassette (with its three bonus tracks!) while it was still their most recent album.

It remains comfortably in our Top 10 Fall albums, if not quite breaching the Top 5 (of which there are thirty full length studio ones, depending on how you count them). And trust us that’s a high accolade.

It is the closest they ever strayed to goth, without ever being as hoary or gloomy as the likes of contemporaries The Mission or Siouxsie And The Banshees. The goth-ness is probably really most evident due to the unorthodox mastering process resulting in a murky, ominous sound, with even Craig Scanlon’s usually trebly guitar sounding muddier as the album is even more bass-dominated than usual.

However, the album’s opener R.O.D.’s lyrics probably struck a chord with many of the flour-doused-overcoat-wearing persuasion, “robes in tatters, it’s approaching, lips and tongue abhorrent”. The chugging intro to the song is followed by a very Brix guitar line, which she called “sad, haunting surf music”, although there’s a hint of Joy Division in there too.

Brix’s wailing vocal introduces Dktr. Faustus before Mark E. Smith starts pronouncing through a megaphone, his first use of what is now a real favourite toy. This is the only track on the album to feature Paul Hanley on drums, and was first recorded as Faust Banana for a Peel Session two years earlier.

The first, jauntier version of Shoulder Pads, based on a sample of MES whistling, manipulated by multi-instrumentalist Simon Rogers, has Smith laying into someone who “couldn’t tell Lou Reed from Doug Yule”.

Next up is a raucous cover of US garage band The Other Half’s Mr Pharmacist, released as a single before the album came out (becoming their first ever Top 75 hit, at number 75!). If you’ve read Getintothis’ Top 10 of the band then you’ll know the effect this song has on this writer if it is ever played in public. Clear the dancefloor.

The longest cut on the record closes side one, all seven minutes-plus of the rolling Gross Chapel – British Grenadiers, described by Brix as “otherworldly and sublime”, and the best of the longer cuts on the album.

Check out The Rise, The Fall, The Rise by Brix Smith Start – a fairytale with a grim edge

U.S. 80’s–90’s kicks off the second side, with MES declaring “I’m the big-shot original rapper”, no idle boast, with the tune driven by an industrial/hip hop beat. This time, Brix has bigged up her contribution as “blistering and hypnotic”.

Another Brix vocal intro starts the short but urgent Terry Waite Sez. The titular Archbishop’s Special Envoy was kidnapped just four months after the album’s release, boosting Mark E. Smith’s belief in his powers of premonition. Waite’s brother even rang up Beggars Banquet in search of psychic clues in the lyrics.

The comparatively slight (but still lengthy) Bournemouth Runner (written about someone who ran off with the band’s backdrop from a gig) is followed by the sparse, twangy (and also elongated) Riddler! before the LP closes with the murkier Shoulder Pads reprise, this time referencing Talking Heads instead of the Velvet Underground and The Beatles and mentioning the hilarious thought of “MES in shoulder pads”.

CD and cassette versions both add that year’s single Living Too Late and a b-side, with a live track being exclusive to the tape. Yes, those were the days of multiple formatting, with even The Fall succumbing, despite not being signed to a major label.

It is hard to pick out the specific effect of this particular album on the rest of the music world. So many bands have been influenced by The Fall (such as Sonic Youth, Elastica, Guided By Voices, Suede, The Wedding Present and Pavement of course), and their output is so vast, that it is hard to attribute anything especially to this album.

The band went on to greater commercial heights over the next few years before Brix and some of her pop smarts departed (though she returned again briefly), even broaching the Top 40 singles chart with covers of Motown and Kinks songs. However, Bend Sinister remains a high watermark in their long and surprisingly varied career – as John Peel once said, “they are always different; they are always the same”.